Aloha is one of the most important words in the Hawaiian language. It means hello, goodbye, love and is used in a host of other descriptive ways. Nowadays it is often used lightly, almost without thought. "ALOOOOOOHAAAAH!" is a cry often heard to draw tourists into a shop, to get an audience into a certain mood, etc. But its real spirit, and its real use by those who have the spirit, has not been eclipsed.

Following, in the words of Hawai'i's last reigning monarch, Queen Lili`uokalani (1891-93), is the true meaning of this magical word.

"And wherever [the native Hawaiian] went he said 'Aloha' in meeting or in parting. 'Aloha' was a recognition of life in another. If there was life there was mana, goodness and wisdom, and if there was goodness and wisdom there was a god-quality. One had to recognize the 'god of life' in another before saying 'Aloha,' but this was easy. Life was everywhere - in the trees, the flowers, the ocean, the fish, the birds, the pili grass, the rainbow, the rock - in all the world was life--was god--was Aloha. Aloha in its gaiety, joy, happiness, abundance. Because of Aloha, one gave without thought of return; because of Aloha, one had mana. Aloha had its own mana. It never left the giver but flowed freely and continuously between giver and receiver. 'Aloha' could not be thoughtlessly or indiscriminately spoken, for it carried its own power. No Hawaiian could greet another with 'Aloha' unless he felt it in his own heart. If he felt anger or hate in his heart he had to cleanse himself before he said 'Aloha'." 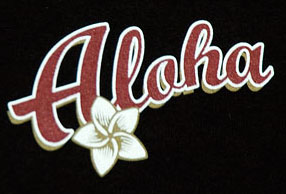 Go here to to learn about "Honi, the Hawaiian Kiss"